1906.
During the 1906 Earthquake and fire of San Francisco, several of the plant facilities owned by the California Fruit Canners Association were destroyed.  That same year, the company gained ownership of a cleared lot on the corner of what are now Leavenworth and Beach Streets, in order to build a new cannery and warehouse.


This new waterfront location was perfect for the new fruit and vegetable canning plant.  The location provided berthing for ships, a rail system for bringing fruit and other produce directly from California's fertile agricultural valleys, and a convenient way to ship finished cargo on ocean-bound vessels.


1908.
Cannery workers were able to have a front row view in 1908, as the Great White Fleet steamed through the San Francisco.  The fleet was on it's way around the world on the goodwill tour ordered by President Theodore Roosevelt.
1909.
By 1909, The Cannery the largest fruit and vegetable canning plant in the world, producing over 200,000 hand-soldered cans per day and employing 2,500 people.  The California Fruit Cannery Association eventually changed their name to "Del Monte."

Crates of peaches were transported by hand car from railroad cars into the cannery for processing.

After male workers delivered full lugs of peaches to the preparation tables, women removed the pits with spoon-shaped knives and cut each peach in half. The halves were then taken to the peeling department before canning.

Containers were then filled with peaches through a hole in the lid, which was then plugged with a metal disk and sealed by hand with a solder.

1923.
This historic photo shows The Cannery in 1923.  To the bottom left of the photo, one can see what would become Hyde Street Pier Ferry Terminal and the Aquatic Park, both of which were built over the rubble from the 1906 Earthquake.
Behind The Cannery, one is able to see North Beach and a bare Telegraph Hill, with the absence of Coit Tower.  Coit Tower would be built 10 years after this photo was taken.  Another familiar landmark is visible in the background - the twin towers of St. Peter and Paul's Church were being built at the time of the photograph.


As a result of The Great Depression, The Cannery ceased production in 1937.  The Cannery became a warehouse for various companies until the 1960s, when it was doomed to undergo demolition.
1963. 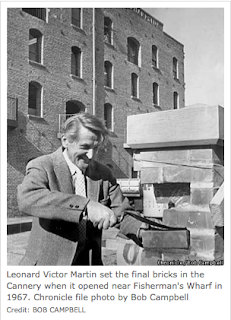 Leonard Martin heroically saved the brick-walled cannery by purchasing it in 1963.  His reason for purchasing The Cannery was first to "save the historic structure from the wrecker's ball and, second, to preserve this landmark, not as a static monument but as 'a place for people to detach themselves from everyday hustle and bustle, in an environment reminiscent of the romantic marketplaces of Europe.'"
In an effort to preserved what was left of the original cannery, Martin enlisted a remarkable team of legendary creative and technical professionals to restore the abandoned cannery into a three-level walled city of brick walkways and bridges which would become a hub of fine stores, restaurants and entertainment venues.

One of the major decisions was to split the massive factory into two buildings, divided by a zigzagging corridor open to the sky.  For preservation purposes, all of the outside walls except those in the central corridor are from the original cannery and packing plant.  Magnolia and pear trees are planted in the central corridor, while the 75-foot wide courtyard is dotted with 20-foot high olive trees, over 130 years old.  These beautiful trees are from an old grove near Marysville, California.


"In The Cannery we have balconies, open arcades, outdoor escalators, broad and open stairs and a dramatic outdoor glass elevator. We wanted to retain the rich, exciting feeling of a colorful marketplace," stated The Cannery's architect Joseph Esherick.  The beautiful new cannery opened in 1967.   It is now a place for people to sit and relax in the sun, amid flower carts and sidewalk cafes.
San Francisco's street musicians and entertainers perform in the courtyard, and special events are often scheduled, always free to the public.

1970 - Present.
Thanks in part to Leonard Martin, The Cannery received an Honor Award in 1970 from the American Institute of Architects and, along with Ghiradelli Square, spurred a national movement to recycle older buildings and influenced tax legislation to preserve them.  The Cannery is still owned by the Martin family.
Posted by Blog at Wednesday, May 11, 2011

Fantastic article! Loved seeing the historic photographs and learning more about this great property. However, the Martin family no longer owns The Cannery. As of 2007, the property was owned by Vornado (NYSE: VNO) and was in default last year. While in their possession, it was a joint ownership with Patson Companies in SF.

In the late 1960s-early 1970s there was a photography shop in the Cannery just off the court yard on the left perhaps the first shop on the left. The photography was at the time almost as famous as Ansel Adams. He had panoramic black and white of the Golden Gate bridge, and an unpublished photo of a young WWII soldier, his Asian wife, and their baby with its hand on the mothers breast. The photo really moved me, and when I went back the next morning, the photographers wife was there. When I told her of my emotional experience, she and I were both crying. I have tried for years to find his name, since I forgot it shortly after, and before the internet was around. Early Gardner RN New Mexico.

I loved this wonderful place! I lived in Dublin in 1970-1973 and made many trips to SF. The Cannery was my favorite place of all. Lots of cool shops and markets, it was vibrant and groovy [as we said in the 70's!!!] I am happy to see that it is still going...however I read that it is not so vibrant any longer. I hope it gets it cool factor back, it was really something!

Looking for name of British type restaurant in 1970s in San Francisco cannery I think like a historical estate, served beef Wellington with Yorkshire pudding. Can you remember name? Ben something?

I think it was called Ben Johnson

I am happy to read this post as much pleasure as you would have done by writing this post, you are a person writing a great post, I wish in life that you keep on writing such posts even further.
Independent Gurugram Call Girl
Escorts Service Gurugram
Best Friendships
independent call girls in gurugram
Gurugram escorts

A good post is always beneficial, as your post is making the same effect. Your post is very knowledgeable. I was quite surprised to see your post that you can see such a good post even today. Hope you You will continue to provide similar posts to us as well. Thank you.
Gurgaon Call Girls provide you with the perfect combination of Sexual Pleasure and sensual services to recognise. In Gurgaon, Call Girls offers you an adventitious way of amusing your dreams. With impressive Gurugram Hot young Call girls who portray behaved, aware, and mystified and wonderful friends, it helps you to accessorise. On the off erosive that you are involved with reaching the agreement of a large number of bugged and experienced consumers, again in this gratitude you are surely professional for professional advice.

I really enjoyed working
in a shop called BAZAAR CADAVER DIA in the Cannery in 1972-1974. It was a wonderful shop owned by Mr & Mrs Loeb who were lovely employers. It was a kaleidoscope of handcrafts,Clothing,jewellery from American India,,Mexican & South America. It was one of the highlights of the complex They had another smaller shop nearer to Union Square. They had a daughter so I wonder if the shops are still there ?

Escort girls in Delhi make independent Brahma; Delhi call girls are always ready to serve you for interested people. Call girls in Delhi have been placed in many categories. Surely we are available according to you, you can come on our website and contact us. Delhi Escort Service

Welcome to Gurgaon Escort Service. We provide one to one sexiest girls and provide cheap service rates. You can visit our website to take advantage of the service. Cheap Escort Service In Gurgaon

Escort girls in Delhi make independent Brahma; Delhi call girls are always ready to serve you for interested people. Call girls in Delhi have been placed in many categories. Surely we are available according to you, you can come on our website and contact us. Female Escort In Delhi

Find Best Escorts and Call Girls At Schloka. Here Your Can Post Escorts category Ads and Get Best Business. We Allow To Post ads in all Over India Cities. and You Can Also Find Best Escort Girls Here.

If your copyrighted material has been posted on SOYASHARMA.COM or if links to your copyrighted material are returned through our search engine and you want this material removed, you must provide a written communication that details the information listed in the following section. Please be aware that you will be liable for damages (including costs and attorneys' fees) if you misrepresent information listed on our site that is infringing on your copyrights. We suggest that you first contact an attorney for legal assistance on this matter.

Movies Buddy provide you super quality of movies which you download from this website. Movies Buddy is one of the best platform for downloading Bollywood, Hollywood and Tollywood HD movies.
We are very happy to provide you latest movies, latest tv shows, latest web series. Please Join on Movies Buddy Telegram group.

Bluehost web hosting is a reliable, fast, and affordable with friendly 24/7 customer support. Get it here

Although I don't usually comment on blogs, your article is convincing enough that I can't help but to write something. Keep up the great work, Man. Java Burn